Proprietism is based on the premise that a network of for-profit entities, each with unlimited liability, is the most efficient and welfare-generating form of human organization. The posts on this blog provide rationalist support for this notion (while the support for the movement of proprietism within society is empirical). Below is an abstract analysis that marries classical economics and proprietism.

The proprietist theory uses microeconomic theory terminology within the IPO model. An IPO model is very simple: it is a system that inputs a resource, transforms that resource in its processor, and outputs that resource. When two systems interact, the output of one system becomes the input of another system. 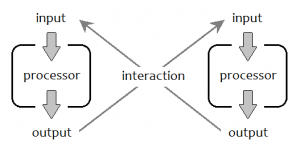 In microeconomic theory, a firm has inputs to production K for capital and L for labor, and the cost of capital and labor are represented as C(K, L). The firm produces a product X, and earns total revenue from the sale of X, represented as TR.

Logically integrating this terminology into an IPO model, K, L, and TR are inputs to the system, C(K, L) and X are outputs to the system. Total sales revenue enters the firm as a monetary input, and is retained as profit or leaves the system as the monetary outputs C(K, L), which are exchanged with a supplier for the resource inputs capital and labor, which are then produced into the resource output good X, which is then exchanged in a transaction with a buyer system for money, which reenters the system as total sales revenue.

Expanding this model, we can visualize the roles of traditional departments within a firm.

We can similarly use microeconomic theory to apply this model to the consumer/worker. A consumer system inputs money as income M, which he saves or outputs as money paid in exchange for the resource inputs good X and Y, which sustain and support the consumer system, allowing him to output labor, for which he gets paid an income M.

For the independent contractor, the self and business have merged into one. His goods and services are his inputs to production, which create his brand and motivate him to work. His work is his product, his income is his revenue, his savings are his profit, and the price he pays for goods are his costs. In an economy of sole-proprietors, there is a paradigm shift for the structure of businesses and industries. The model implies that an individual’s customers are his employer, on the grounds that he is providing them his labor service in exchange for their payment. Likewise, an individual’s subordinates are like suppliers in that the individual is paying them in exchange for the service they provide.